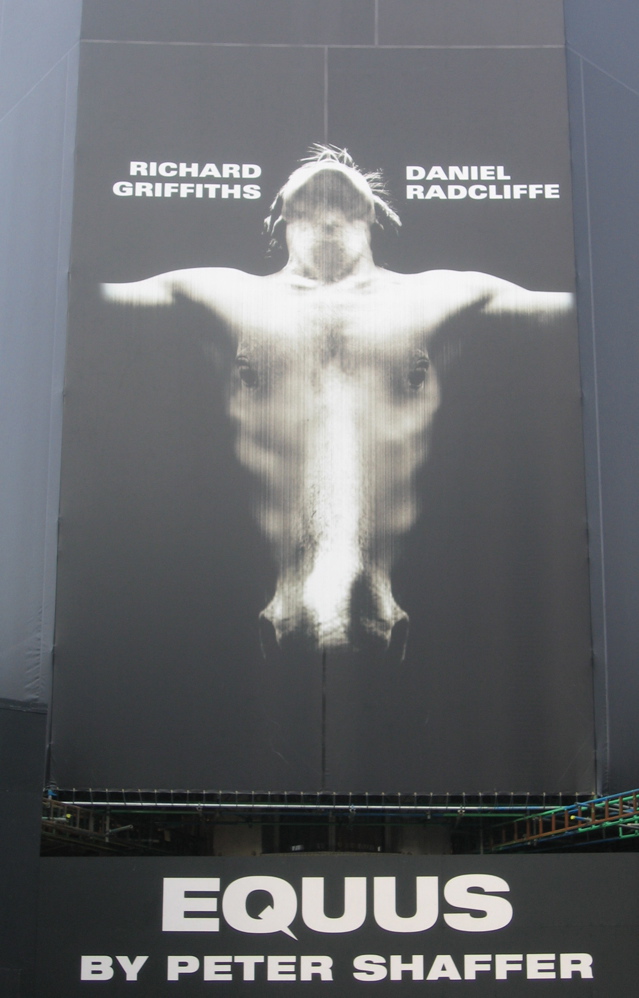 I saw the play twice (the first two days) and I have to say thanks to some great people for the tickets. I’m not a professional reviewer so please bear with me if this is long (the official reviews won’t be out till the end of February). The first night (Friday) I watched the play from the stage, which gives a viewer the ability to see the stage from above, the following performance I saw was from the front of the stage. While both give the viewer the ability to see different angles of the play, the best is actually from the front. From this location you get to see the actors expressions when saying their dialogue, but from above you see Dan clearly on stage lying on a block with tense concentration, so much so that when he jumps up to say his lines you can see his sweaty hand prints on the boxes.

I’m sure by now most, if not all of you know the premise of the play, but if not it’s about a young 17-year-old boy who has blinded six horses and is sent to a psychiatrist instead of jail to find out why he did such a thing.

One thing that grabs you at the beginning of Equus is the stage. It opens with two lone figures in a lovers embrace at the center of the stage with one singular spotlight. A platform with four rectangular boxes are in each corner and you have to wonder, is that it? It’s a very sparse stage set-up and was designed by the original designer, John Napier. It’s original in concept with the actors moving the boxes so that they can be used as a living room, a doctor’s office and a stable.

We then get to meet Richard Griffiths (Dr. Martin Dysart), who lighting up a cigarette starts a monologue that is interspersed during the play.

Alan (Dan Radcliffe) enters the stage with no words, looking intensely at Dysart and around the stage. Suddenly he starts to sing commercial jingles (which I can even remember as a child) and the audience laughs as Dysart interjects some comedy in reference to which one he likes – in a way to bring Alan out and to talk to him.

By now we have met the two most important characters in the play, of which both are on the stage at all times.

One of the funniest scenes is the first real interaction between Strang and Dysart in which they play a game of telling the truth – a question and answer game. During the process Dysart learns of the first experience Strang had with horses while he was a young child. The power he feels when on that horse and the reaction of his parents in trying to take something away from him in which he enjoys. We also learn of a dream Dysart has as a way of interacting with Alan - a way to gain his trust.

I now have to say something about the horses used in the play; they are not real and are portrayed by actors wearing metal heads. The interaction of the actors playing the horses and Alan is unique and the first time you see Dan (Alan) jump on the back of the actor portraying one is funny for a moment as you watch them gallop around the stage, but that thought quickly leaves you and you can actually see it happening – that is what is so good about this play. You actually feel as though you are not watching a play and become engrossed in the action.

Throughout the play you encounter the people who make Alan, Alan. His parents, a mother who is religious and a father who is an atheist. His mother who reads to him from the bible and stories of horses, a father who tells him that “Religion is the opiate of the masses,” Jill a girl who introduces him to horses and the owner of the stable who wants to kill Alan for his actions.

Alan’s encounter with the horses at the stable the first time can be compared with a person walking in and seeing a great work of art or seeing something that you’ve admired for such a long time. The look of shock, glee and admiration on your face, the dumbfounded loss of speech, the feeling that your knees will buckle because of the sheer luck that you have found something that you love, all of which Dan portrays admirably. When Alan is given a body brush and currycomb by Jill to brush his first horse you get the feeling that Alan has found the one true, loving thing in his life. He is frankly in heaven and he is shocked that he is there, he has found his temple and his God is happy to see him.

Alan’s downfall to reality starts with finding out that his father is a normal man, a man of secrets, just like him and follows with Alan and Jill going to the stables and Alan’s inability to consummate their date, even though he wants to with all his heart.

The last 15 minutes of the play are the most riveting and no, it has nothing to do with the fact that Dan is naked or that Jill and he tried to simulate having sex on stage. The mere fact is that this is a reenactment of that night. This scene, which lasts about seven minutes, couldn’t have been done otherwise. For all those who question the nudity you have to think, would the character actually have gotten dressed after his encounter with Jill, no he wouldn’t, his actions were in the heat of the moment, the crescendo of his love, now hate relationship for his ‘God’ Equus. A way for him to get better, which is something that deep down he wants – it is needed and frankly to hear people comment on just those last minutes of the play is wrong. The play, on a whole is riveting, as are the characters and the actors who portray them.

Joanna Christie, who portrays Jill Mason, is only on the stage for a total of about 13 minutes but is amazing. Jill, likes Alan for Alan, she doesn’t know about his obsession and is extremely hurt when it all goes wrong.

Every person who sees the play will come away with something different, for me it was pitying Dr. Dysart for feeling so inadequate in his own life – he’s so very lost after meeting and treating this patient and his belief that Alan has it best with his passion. Alan actually feels something with such passion that it took over his whole life. That he, the doctor has no such passion, that he wants to forcibly remove that passion from Alan to make him like everyone else in the world. What a miserable world we would all live in if our passion, whatever it is, is removed from our being.

Many fans will go just to see Dan Radcliffe on stage and so many have questioned his talent with this move, that I can honestly say that those people will be sorely disappointed. Dan is great in this role, while he is not on par with Richard Griffiths, Dan does hold his own against others who have had years experience on the stage. I applaud him for taking on such a very questionable role and would have seen it regardless if he were starring or not.

Friday’s preview for fans, with the opening night not slated till the end of the month, needs to be tightened, it does run a bit long and entrances and exists need to be fluid. During Saturdays showing Dan nearly tripped while on stage during the scene on the beach and had trouble putting his feet into the stirrups right before the interval – but those had nothing to do with his acting ability but rather his exuberance during those scenes. Others fumbled their lines during this showing and I have to feel this has to do with just exhaustion from the night before.

At the end of Friday’s performance when Dan and Richard where given a standing ovation you had to feel for Dan, he had a look of shock, relief and disbelief and you could see his shoulders drop that it was over and that he was exhausted. When Richard grabbed his head and gave him a kiss on the forehead one could feel that it was Richard’s way of saying ‘job well done’ and frankly getting that from someone of Richards caliber is thanks indeed. Richard had faith in Dan’s ability to do this role because if he didn’t he wouldn’t have put his career on the line in doing a play just because the lead actor from the Harry Potter films decided to branch out and do something different, to get away from being pigeon-holed in that role. Richard and others were not paid enough to do this play so each of them must have known that Dan could carry it off and he certainly did. If or when Dan ever decides to do another theatrical performance people won't comment that he got the part for who he is but rather for what he can do and I hope the critics point that out in their reviews.

I also have to say that if Peter Shaffer, who wrote the play, sits through it repeatedly, it must be good – as he was there in a box, both times I saw the play.

If you have a chance to see the play before it ends in June, please do so, and I’m sure you will come away feeling and thinking about yourself, something that rarely happens nowadays.

If you have any questions about this piece please email me directly at [email protected] as I didn’t put a act for act description in my review and you may want to know more.